By Paul Sperry, RealClearInvestigations
September 21, 2021
AP
X
Story Stream
recent articles
President Biden’s national security adviser figures prominently in a Nixonian dirty-tricks operation under grand jury investigation by Special Counsel John Durham, who is building a conspiracy case, according to people familiar with the ongoing criminal probe. They say the senior official, Jake Sullivan, who made several TV appearances during the recent Afghanistan crisis, is a subject of that investigation.
In 2016, before taking the top security post at the White House, Sullivan was the foreign policy adviser to the Hillary Clinton campaign. In that role, he spearheaded what was known inside the Clinton campaign as a “confidential project” to link Donald Trump to the Kremlin through dubious email server records fed to both the FBI and the CIA, said the sources, who spoke on condition of anonymity.
Both before the 2016 election and again after Trump was sworn into office, Sullivan is said to have taken the lead in promoting the alleged Russian connection, which was later debunked as a baseless smear.
The Clinton campaign project, these sources say, also involved compiling a "digital dossier” on several Trump campaign officials — including Gen. Michael Flynn, Paul Manafort, George Papadopoulos and Carter Page — that exploited highly sensitive, nonpublic Internet data related to their personal email communications and browsing of websites, known as Internet Protocol, or IP, addresses. To mine the data, the Clinton campaign enlisted a team of Beltway computer contractors with security clearance who work with the FBI and the intelligence community.
The campaign provided the data to the FBI on two thumb drives, along with a five-page document known internally as the “Trump Associates List,” which gave federal agents an investigatory “roadmap,” according to people close to the case. Based on the material, the FBI opened at least one investigation, adding to several others it had already initiated targeting the Trump campaign in the summer of 2016. 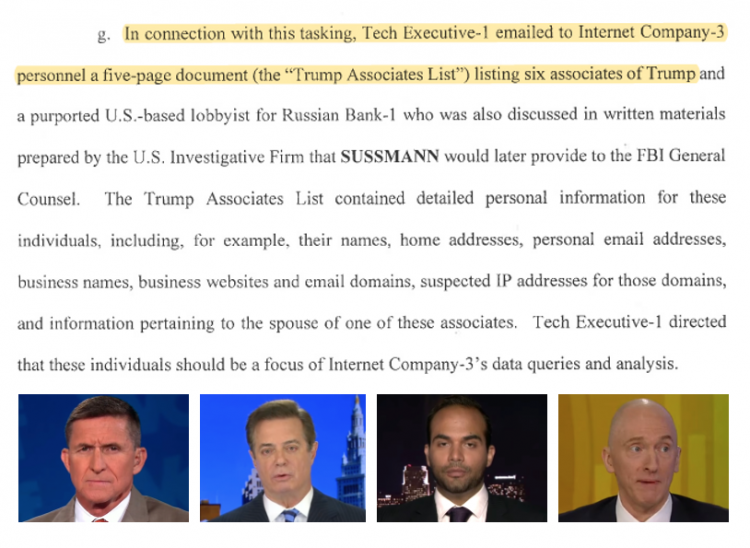 Alleged Trump targets (left to right): Gen. Mike Flynn, Paul Manafort, George Papadopoulos, Carter Page.
U.S. District Court for the District of Columbia/YouTube/CNN/FNC/RCP
Last week, Special Counsel John Durham charged Michael Sussmann, a Clinton campaign lawyer who worked closely with Sullivan, with lying to the FBI about his clients and their motives behind planting the rumor of a secret Trump-Russia server at the highest levels of the FBI. Durham was appointed in 2019 to scour the years-long Russia “collusion” investigation of Trump for criminal wrongdoing,
But the independent prosecutor made it clear in his lengthy indictment that several people were involved in the conspiracy to mislead the FBI and trigger an investigation of the Republican presidential candidate, including Sullivan ... 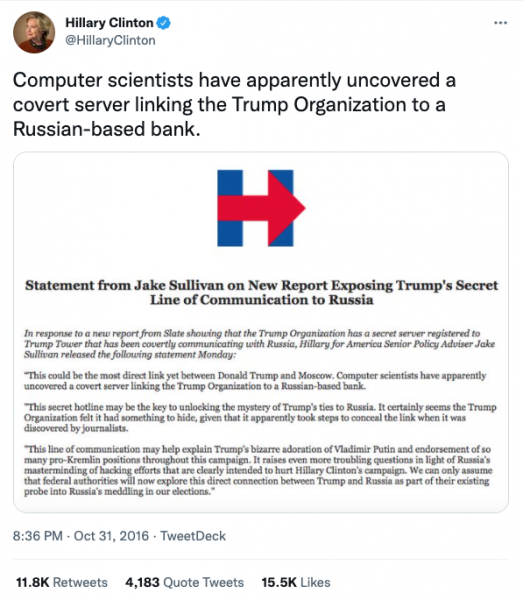 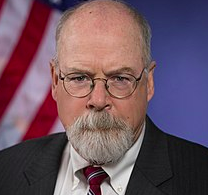 John Durham: Allegedly building a conspiracy case.
U.S. Attorney's Office, D.C./Wikimedia
… In a statement, Durham said his investigation “is ongoing.”
Indictments for a single-count process crime such as making a false statement normally run a page or two. But Durham’s filing spans 27 pages and is packed with detail. FBI veterans say the hard-nosed prosecutor used the indictment to outline a broader conspiracy case he’s building that invokes several other federal statutes.  "That is what we call a 'speaking indictment,' meaning it is far more detailed than is required for a simple indictment under (federal statute) 1001,” which outlaws making false statements and representations to federal investigators, former assistant FBI Director Chris Swecker said in an interview with RealClearInvestigations. 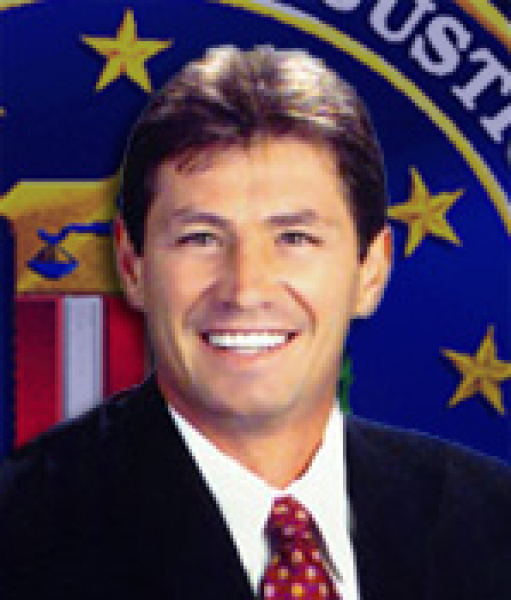 Chris Swecker: The Sussmann indictment "is damning," and "I definitely see more to come," says the Former Assistant Director of the FBI's Criminal Investigative Division.
FBI.gov

"It is damning,” he added. “And I see it as a placeholder for additional indictments, such as government grant and contract fraud, computer intrusion, the Privacy Act and other laws against dissemination of personally identifiable information, and mail fraud and wire fraud — not to mention conspiracy to commit those offenses."

The sources familiar with the Alfa Bank investigation note that Durham is continuing to use the federal grand jury he impaneled to hear the case to investigate whether the evidence that was shopped to the FBI was forged or fabricated to create the appearance of suspicious Internet communications. The documents Sussmann provided headquarters, which included data files, claimed to show covert Internet communications between the Trump Organization and Russia-based Alfa Bank. Providing the FBI false evidence is a crime.

The authenticity of the data presented to the FBI in three “white papers” and two thumb drives has been called into question by several sources.

Alfa Bank commissioned two studies that found Domain Name Service data compiled by computer networkers recruited by the Clinton campaign to make their case of a possible conspiracy between Trump and the Russia-based bank were formatted differently than the bank server’s DNS logs.

Also, independent cyber-forensics experts found that the emails released by researchers bore timestamps that did not match up with actual activity on the servers, suggesting the timestamps had been altered. The marketing firm Cendyn reported its server sent its last marketing email in March 2016, but the DNS logs provided by computer researchers claimed to show a May-September window of high-volume traffic.

The logs Sussmann and his group presented as evidence to the FBI had been pasted into a text file, where they could have been edited.

Emails Durham’s investigators uncovered that were exchanged among the tech executive Sussmann enlisted for the “special” campaign project and his team of researchers reveal that they discussed “faking” Internet traffic ... (more)

This and all other original articles created by RealClearInvestigations may be republished for free with attribution. (These terms do not apply to outside articles linked on the site.)

We provide our stories for free but they are expensive to produce. Help us continue to publish distinctive journalism by making a contribution today to RealClearInvestigations.